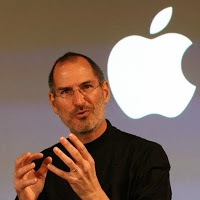 When I was about 5 years old, I was first introduced to an Altair 8088. This was a box that had a bunch of switches that just went up or down to make ones or zeros. this was the first computer I had ever learned to use. We used to use this Altair to launch model rockets off by using the switched to govern the launch sequence.

Then in school I was introduced to the Apple IIe. This was my first real GUI computer and it was cool looking. It used a new graphics interface called, what is commonly known now in the computer world as a GUI (Graphical User Interface). I then Moved up to the Macintosh. Wow what a trip that was. Using the Macintosh was so easy to use and it was simple. Simplicity I guess was in Steve Jobs’ mind when he created this PC. I then was turned on to the IBM Personal computer. A lot different than the Macintosh or the Apple IIe or the Altair.

Steve Jobs was a major innovator when it came to technology. His partner Steve Wozniak and himself proved that Personal Computing could be feasible. IBM at the time were focusing on big mainframe servers and business computers. Little did IBM know that PC’s today is the tool other than the car that we use everyday. Technology prior to this revolution was the punch tapes etc. Jobs revolutionized the industry. Steve Jobs was a legend in his own right mind. He focused on selling the product while Woz was the brains behind the Apple.

In the Movie “Pirates of Silicon Valley” , it portrayed Steve Jobs as a gruff, angry person all the time, always on drugs and looking for himself in Hare Krishna and other Stereotypes of the time. The real man behind the success of Apple focuses on him as a visionary.

Back when I was working with a very famous Internet Service Provider people disliked the Macintosh, Apple and all they stood for. Many of my fellow Tech that I have spoken to said to me that Apple was the devil and that the company was not going to last. Little did they know right? They sure have been proven wrong! Apple has become one of the most productive and most innovative companies on the planet and because of Mr. Jobs they have continued this innovation over the years.

Steve Jobs is now gone. His legacy will hopefully inspire us to try and change the world for the better. We are all human beings and one person can make a difference in this world. Steve Jobs did!

I hope that we can all learn a serious lesson from the man who revolutionized the way we work play and socially interact with one another.